This is an incredibly rare early matched set of pointed M36 Panzer Grenadier Kradschützen Regiment 3 shoulder straps. Both boards are without a doubt original to one another, both still have the removable straps on the reverse. The tops show the embroidered gothic “K” with the number “3” underneath. The lime green color used as well as the symbols indicates to us these would have been issued by a member of (Kradschützen Panzer Grenadier Regiment 3.) The edge of the boards have 3/4th’s covered in pre war silver tress, indicating the NCO  rank of Unteroffizier. I can not stress how insanely rare this set is, there are maybe a handful in the world with embroidered letters with regiment numbers with the Panzer Gren. lime green coloring. A set like this would be virtually impossible to upgrade, let alone find on the open market.

The Wehrmacht developed Kradschützen as a rapid mobile assault and reconnaissance force from 1936 and were used extensively during the early stages of the Second World War as part of the German Blitzkrieg successes, and Operation Barbarossa. The development of Kampfgruppen, Panzer Grenadier regiments, and armored halftracks meant that large formations of lightly armed Kradschutzen motorcycle troops became obsolete with the soldiers being transferred to other services such as Panzer Grenadier regiments and Kampfgruppen. 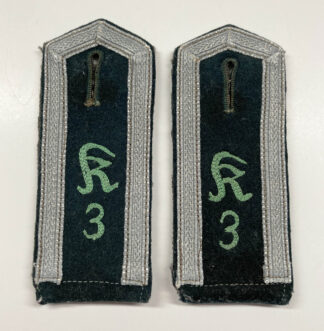