Great example of a period worn example of a 1936 Pattern Legion Condor Wound Badge in the grade of Silver. Far more sought after than their later pattern counterparts. Produced in silvered tombac in a hallow stamped pattern. Majority of the silver wash has worn away from the high points, the reverse shows no damaged or repairs to the catch or hinge. Fantastic piece, with clear signs of being period worn!

The Condor Legion who fought in Spain from 1936-1939 did not have a wound badge, or any other award during the conflict. Upon their return to Germany after the victory of the forces guided by Gen. Franco, the Condor Legion, or Spanish Wound Badge, was established on May 22, 1939. 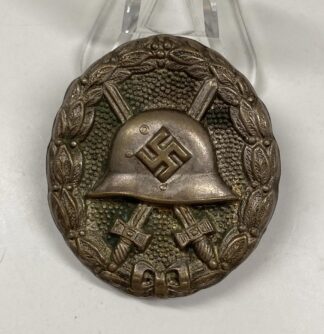