Textbook example of an early M35 pattern greatcoat. Field-grey wool construction with a double breasted style front. The coat is full length with no alterations. There is a dark green cloth lay down collar, and the coat features dual vertical parallel rows of six front closure buttons with corresponding button holes on the left front panel, and a single button hole on the right front panel. There is a single metal hook and eye at the neckline. There is a stellar pair of early lime green shoulder straps with gold “1” cipher sewn into the shoulders, the inside shows the standard lining worn by enlisted troops. The left sleeve shows a hand sewn Krim shield with matching wear to the sleeve itself, underneath is shadowing indicating this was defiantly a war time worn award on this coat. Near the inside pocket is the sewn in name tag to the original owner of this coat, some research could possibly help identify this man.

The 1st Skijäger Division was formed on June 2nd 1944 by expanding the 1st Skijäger Brigade, which was initially formed in September 1943. The 1st Division was formed around existing units which were strengthened with new recruits. Elements of the 19th Panzergrenadier Brigade, the 65th Heavy Artillery Regiment, the 152nd Panzerjager Battalion, and the 18th Werfer Battalion. The addition of the 615th Flak Battalion was used to expand the brigade into a division status. 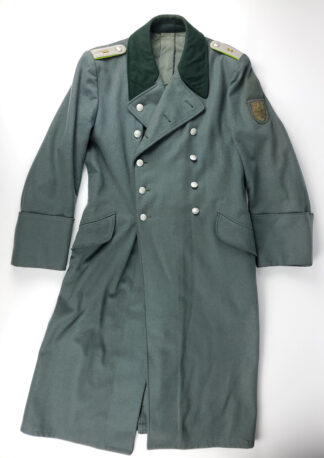