This is a veteran’s badge from one of the Grand Duchy of Mecklenburg-Schwerin’s Regiments/Battalions. The basis of the badge comes from the Grand Duchy’s Military Service Cross. The award was quite interesting due to its similarities to Prussia’s 1914 Iron Cross 2nd Class, except that the latter were silver-toned. Mecklenburg-Schwerin’s award was gilt.
The gilt cross is nestled into a gilt wreath and has crossed swords running through it. The badge is attached to a silk ribbon with red, yellow, and blue, Mecklenburg-Schwerin’s state colors. Its reverse displays a vertical pin that allowed it to be attached to a garment, The pad holding the pin is also maker marked, 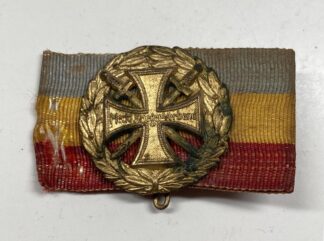