This pamphlet was made by the Germans to tell certain individuals about the Katyn massacre committed by the Soviets March 5th 1940.

The Katyn massacre was a series of mass executions of Polish nationals carried out by the NKVD (the Soviet secret police) in April and May 1940. Though the killings took place at several places, the massacre is named after the Katyn Forest, where some of the mass graves were first discovered.

The massacre was prompted by NKVD chief Lavrentiy Beria’s proposal to execute all captive members of the Polish officer corps. Approved by the Politburo of the Communist Party of the Soviet Union, including its leader, Joseph Stalin. The number of victims is estimated at about 22,000. The victims were executed in the Katyn Forest in Russia, the Kalinin and Kharkiv prisons, and elsewhere. Of the total killed, about 8,000 were officers imprisoned during the 1939 Soviet invasion of Poland, another 6,000 were police officers, and the rest were Polish intelligentsia that the Soviets deemed to be “intelligence agents, gendarmes, landowners, saboteurs, factory owners, lawyers, officials, and priests”

Anything regarding this massacre was completely destroyed after the Soviet Union took over Germany when World War ended. Very historically significant piece! 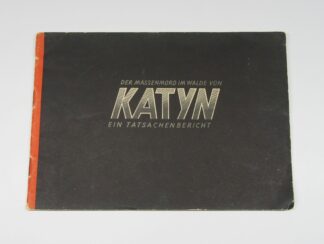