Just an overall fantastic looking example of a very early combat worn M1 helmet. Consisting of a fixed bale front seam shell produced by McCord. This shell dates to late 1941 production period, we know this based off the shell stamp of 96A, this would be considered an extremely early set! The helmet liner is also very early consisting of early unpainted A-Washers and an early leather chinstrap, the original leather chinstrap we often see damaged or missing is still there. The liner was produced by Westinghouse. The shell has “Captain Duke” scratched into the front of it, the name “Duke” is also on the shells canvas strap. If you are looking for a great looking example for a mannequin, or to simply put in a display case, this is the one! 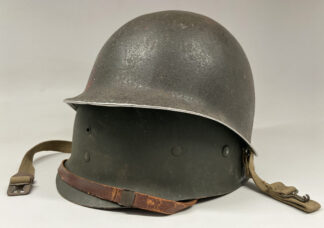