Fantastic example of a German State Service Armband, these were worn by uniformed German personnel who were attached to the Armed Forces during WWII. Often, these were worn by men of the Reichsarbeitsdienst (State Labor Service) and Reichsbahn (State Train Service) who were operating with the German Army in the occupied countries. This is an excellent example, which looks to be in unissued condition. This Deutsche Wehrmacht armband is a textbook Bevo-style machine embroidered armband, with a very nice State Eagle clutching a wreathed Swaz. 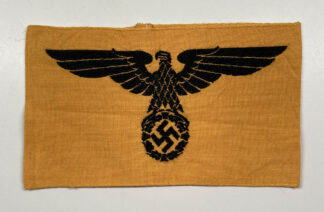