Absolutely fantastic example of a true WWII issued Russian Order of the Red Star Medal. Produced in silver with red enamel that is lightly worn but undamaged. The award is vaulted, the reverse shows the makers mark of the Monetny Dvor Mint. On the lower end of the award is the number (637910), this award was earned by Enlisted Man Ivanov Vasili of the Soviet Artillery, he earned this award for shooting a German tank along with other combat merits on March 2nd, 1944.

Typically when we encounter these awards they are post war issued, or just not related to WWII at all. This example is a 100% wartime issued original that is uncleaned and without damage, this would be a fantastic addition to any true collectors display! 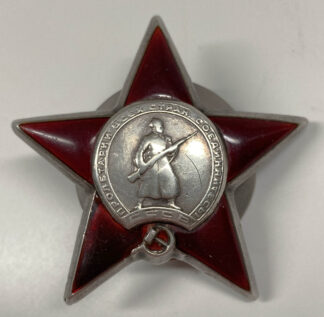