This is an original WW2 production US Marine Corps issued fighting knife, complete with the original leather scabbard. The blade is the rarest of all makers during WWII, with only 10,000 produced from 1943-1944. Near the handle on both sides of the blade is Robeson Shuredge maker stamp on one side, the reverse side of the blade is “U.S.M.C.” stamped. The Robeson knives are the most desirable manufacturer from this time period. Very cool piece of American history! The blade has some great looking field wear, there is no rust or pitting and has been period sharpened as all combat blades would have been. The handle has the sought after red spacer and  leather grip. The leather scabbard is all original with original stitching and staples and would have been the one issued from the manufacture with the knife.

Now the KILLER part about this amazing piece, the original soldier who this was issued to made himself one awesome knife! After removing the handle, he modified the grip and attached the USMC globe emblem from the collar of a dress uniform, and the Infantry crossed rifles emblem. After this, he modified the pommel nut and made a type of skull crusher end cap. You can almost guarantee this knife lived one hell of a combat chronicle before coming back to the states! Rare maker with an amazing look, what much could you ask for? 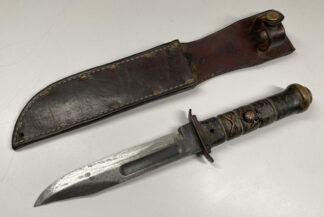