The WAAC (Woman’s Army Auxiliary Corps) was created May 15th, 1942. The WAAC was an auxiliary organization and not officially part of the regular Army, therefore they could not wear the regulation black brassard with white lettering “MP” armband. On July 1st, 1943 the WAAC was converted to full Army status as the WAC (Woman’s Army Corps), after this the WAC Military Police were permitted to wear the regulation “MP” brassard on their arms. This unofficial example is on olive green colored fabric with a yellow circle with green smaller circle on top, green and yellow are the branch colors used for police forces during WWII. To give it a special touch, the original wearer pinned a large very well made period US emblem aka “sweetheart pin”, followed by stitching it down to avoid it from flailing around. This is in my opinion a very uncommon piece, anything MP related to woman during WWII is highly sought after, and rarely seen. 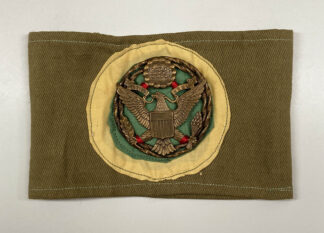