RARE Tableware Set from the Table Settings of Adolf Hitler

When it comes to historically significant pieces from the 2nd World War, anything related to Adolf Hitler will always be very collectible. This is a complete tableware set consisting of the fork, spoon, knife and napkin. This set has the motif pattern also known as the “Informal Pattern.” This pattern is far more rarer than the Formal Pattern with only one thousand pieces having been produced. This pattern is quite plain compared to the formal in that it doesn’t have the Greek key design on the edges. Each silverware piece has the eagle, swastika, and “AH” initials. It was first thought that the eagle showing no detail was a case of it being radically worn, but since then identical pieces show up with others have been viewed in museums. The set is also accompanied by a very, very hard to find beige colored linen napkin. The napkin also has a stitched in “AH” eagle seal. The Informal Pattern was used in the Braun Haus, Sternekerbrau, Führerbau, plus Hitler’s apartment on Prinzregentenplatz. 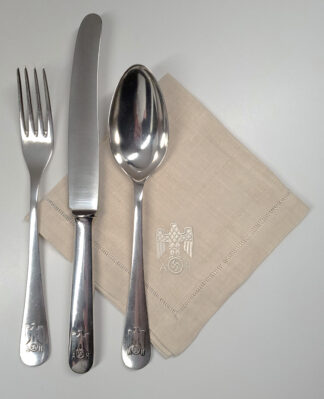 You're viewing: RARE Tableware Set from the Table Settings of Adolf Hitler $3,695.00
Add to cart