Amazing looking uniform to a very sought after division. This Luftwaffe M40 (Model 1940) “Fliegerbluse” uniform was worn by an Enlisted Man in the combat hardened Hermann Göring Division, as indicated by the white collar tabs, early enlisted Hermann Göring cufftitle, and the very rare white piped Luftwaffe shoulder boards worn by the division. The uniform has period sewn insignia with hand sewn collar tabs, and factory sewn breast eagle. There are two sets of award loops on the left breast area, the left sleeve rank and collar tabs indicate the rank of Obergefreiter. The blouse has no major damage or repairs, but does have an amazing field worn look. These hardly ever make their way out of collections when found, this would be great for a combat mannequin display. I can not stress how rare it is to find one of these uniforms!

Note – The Division Hermann Göring was formed in October 1942 when Brigade Hermann Göring  was upgraded with the addition of 5.000 Luftwaffe volunteers and Fallschirmjäger-Regiment 5 (remnants of three separate parachute units that had fought on Crete and on the Eastern front).
The main body of the division was sent to Tunisia January – March 1943 (Jäger-Regiment HG was sent to Africa in November 1942). The HG-units fought with distinction in Tunisia, but was forced to surrender with the rest of the Axis troops in North Africa in May 1943. Only a few men from the HG units managed to escape. 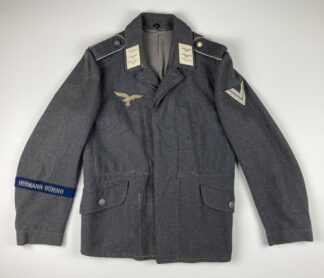