In 1937 officers were authorized the optional purchase of the “ornamented” (ornamentierte)/”piped” (mit Vorstössen) uniform, to be worn as a less-formal alternative to the wfaffenrock when walking-out or use for ceremonial occasions. The M37 feldbluse was identical to the M35 service tunic except the collar and its litzen were the same as the waffenrock. The only difference between the two would be the collar, closure, and cuffs would be piped in the branch waffenfarbe color. It was worn with the piped dress trousers. In 1940 the M37 replaced the  M35 waffenrock for formal and ceremonial dress use. This uniforms rarely survived as the war went on as most were modified for replacement troops, schools or simply revamped after the war.

This example of the M37 field blouse is not only extremely well made, but it is also extremely rare in it’s own right due to being one fo a handful of known examples in the world. Consisting of 2 pleated upper pockets, and 2 lower pleated pockets, this old cut style uniform is very attractive to the eye. Piped in extremely rare lime-green waffenfarbe for (Panzer Grenadier) around the cuffs, down the front closure and on the collar. The lime-green collar boards, as well as the breast eagle were professionally restored to the uniform after it was found with the incorrect insignia applied post war. The shoulder boards (originally sewn) show 1 gold pip each indicating the rank of  Oberleutnant (Lieutenant.) The left pocket shows loops above for a ribbon bar as well as  2 separate awards for awards on the left pocket. Tho this uniform has had the breast eagle and collar tabs replaced, it’s still hands down one of the rarest types of piped uniforms you could ever find.

Inside the pocket shows the sewn in name tag with the name of  “Lt. Wappler” after research the blouse was able to be identified to the following officer…..20th Panzer Grenadier Divison Oberleutnant Egon Kurt Wappler, Date of birth: 31.12.1910 in Wetzelsgrün, Date of death 12.01.1943 in Welikije Luki(ca.1,5km SO a.d.Str. nach Newel).

The 20th (mot.) Infantry Divison was later reformed into the 20th Panzer Grenadier Divison, they took part in the relief of Welikije Luki in 1943. This is where Lt. Wappler lost his life. Such and amazingly rare uniform to even find, let alone one identified to a soldier who was K.I.A.

The price may seem high, but then again finding another true lime-green piped example is virtually impossible. 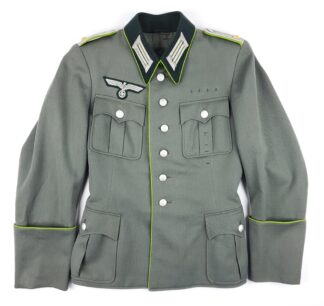