Very rare and heavily faked, these Einwohnerwehr Essen badges were issued to the Einwohnerwehr who were civil militia raised as auxiliaries during the communist uprisings in Germany in 1919-1920. They fall under the general category of the (German Freikorps 1919-1923.) These were actually service awards that came with very elaborate award documents. This is a textbook example that is undamaged and without repairs. The details are very sharp, and the reverse is marked by the manufacture (B.H. Meyer, Pforzheim)

After the initial Spartacist (Communist) uprising in Berlin had been suppressed by a combination of Freikorps units and citizen brigades (referred to initially as “Bürgerwehren”) in January 1919, the Reichs Ministry of Defense ordered regional commands to establish civilian brigades (referred to as Einwohnerwehren, literally ‘Inhabitants’ Defense Forces) on March 22, 1919 to maintain stability within the country. Each state had a central office for the Einwohnerwehr which followed instructions from the military command as well as liaising with local police. The Einwohnerwehr were directly involved in suppression of communist uprisings and workers strikes that occurred around the country from 1919-1923. For example, the Bavarian Einwohnerwehr were heavily involved in the Battle of Munich on May 2-3, 1919 against the Bavarian Soviet government. 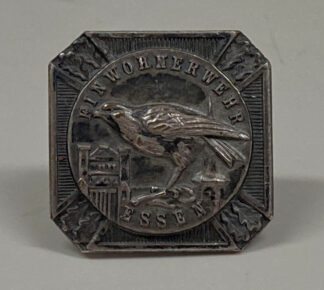