The Regiment General Göring was one of the few Luftwaffe units that entered Austria in March 1938, Sudetenland in October 1938, and Prague in March 1939. Only a small part of the regiment fought in Poland, while most of it remained in Berlin as anti-aircraft troops, they were also in charge of guarding Göring’s headquarters.

This uniform is one of the few true originals worn by one of the members of this incredibly hard to find units. Consisting of an early marked Luftwaffe M35 (Model 1935) uniform, also called the Tuchrock, this was the main field worn uniform for the early Luftwaffe combat troops, before moving onto the M40 Fliegerbluse. This example shows serious field wear with several field repaired holes and worn spots, as well as some moth nips here and there. The inside shows sweat stains, as well as regiment markings, and size/date marks. The uniform has factory applied breast eagle and rare white with red piping collar tabs with one gull, as well as factory applied rare white piped shoulder boards with tress, indicating the rank of Unteroffizier. The best part of this uniform is the period sewn and EXTREMLY RARE to find period applied on a uniform “General Göring” cufftitle, this cufftitle was worn before the regiment made brigade status in July 1942, later being renamed Division Hermann Göring.  The whistle lanyard was in the pocket when found and comes with the uniform. This is a heavily used but not abused field worn uniform from one of these members, untouched and without a doubt something you wont typically find on the open market…Truly a great piece of Third Reich history.

Note : The Luftwaffe Regiment General Göring was formed on 24 September 1935 when the Polizei Regiment General Göring was transferred from the police to the Luftwaffe.
Parts of this unit (I. Jäger-Bataillon/RGG and 15. Pionier-Kompanie/RGG) were transferred to Döberitz in January 1936 for parachute training. These troops were to be the cadre of the future German paratroopers. They were separated from the regiment in March 1938 and redesigned Fallschirmjäger-Regiment 1. After the fall of Poland parts of it were sent to the Western Front using the false designations Flak-Regiment 101 and Flak-Regiment 103. 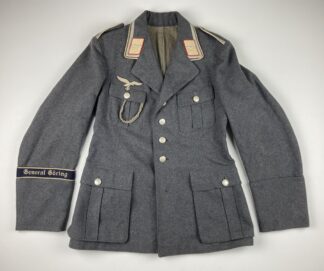