The RBA, “Reichsbetriebszellenabteilung” (National-factory-cells-department), was founded in January of 1931 and was renamed the NSBO, “Nationalsozialische Betriebszellen Organization” (National-socialist Industrial-cells Organization), in March of that year. This organization acted as the NSDAP’s alternative to labor unions and communist worker groups in industrial factories. The NSBO was absorbed into the DAF in October of 1934, and ceased to exist in March of 1935.

This pin would have been worn by members, after transitioning to the DAF this emblem would no longer be in use. This is some of the earliest Third Reich related insignia produced, more and more these items have become very hard to come by. The pin has no damage or repairs. 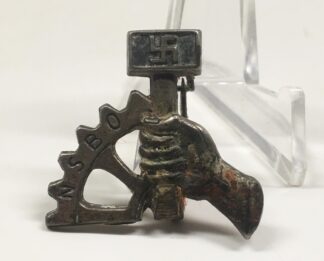