In regards to German camouflage helmets, the odd ball artistic types tend to be some of the best pieces brought back from the war. This example of such a helmet started it’s life as a Luftwaffe M40 later reissued to a no decal w/ standard later period dark flat blue paint and reinforced liner, (circa 1943-1945.) Like we see often the original soldier took some type of rag or cloth item and painted on a flower pot type multi-dot camo pattern, with turquoise-blue, red, and yellow. Typically these types of helmets with crazy color patterns were used by non front line troops such as FLAK crews, or by troops in urban areas such as abandoned towns or bombed out cities. Hence the collector term “urban camo.” Overall this is a one looker original camouflage painted helmet with clear signs of period aged wear/patina. There is no chinstrap, and the forehead of the liner has blood staining. The rim of the helmet is marked “Q62” for the manufacture of  Quist, with the head shell size of “62.” Overall, camo helmets like this really don’t pop up often. 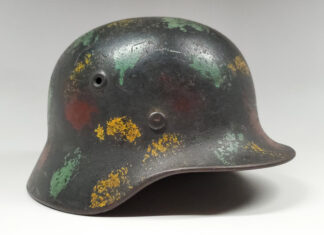