Nationalsozialistische Kriegsopferversorgung (NSKOV – Veteran Welfare Organization) Armband, this example produced in blue wool has the later period NSKOV shield on the center. There is also a strip of gold tress sewn to the center, this would indicate someone who held the higher rank of  Kriegerkameradschaftsfuhrer in the organization. In March 1938 the NSDAP created the Nationalsozialistisches Reichskriegerbund which was the only War veterans organization permitted to exist and absorbed all the former War Veterans Associations. Members would wear their armbands at events, and other functions for the organization. Fantastic armband with the harder to find rank strip. 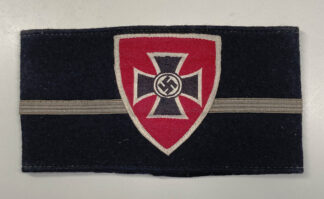