The most common use of this type of goggles was as “general purpose dust goggles for ground troops.” They were designated ‘Dust Proof Glasses’ (防塵眼鏡 ‘Bōjin Megane’) Type 5 (1930 = fifth year of Hirohito’s reign = Showa year 5). These later types were wartime production being produced in a high quality lightweight pale khaki canvas. There are numerous pictures of these being used by troops in the dusty environments of central Asia during the 1930’s and elsewhere in WWII. Japanese tank crews had their own special laminated ‘Armored’ goggles based on the British Triplex ‘Featherweights’ of WWI, non-armored land transport troops, dispatch riders and ground troops used these lightweight folding lens Type 5 dust goggles from 1930, until  the end of WWII. Nice example with undamaged glass, salty combat worn look! 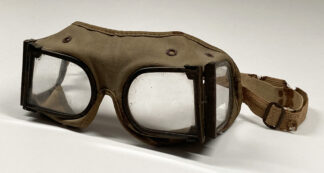