The primary kind of bayonet used on Japanese rifles in World War II was the Type 30, introduced in 1897. During World War 2 these would be used on the Type 38, Type 44, and Type 99 rifles, and even the Type 92 Machine Gun. This is a fantastic example of a Mid-War period bayonet, the straight quillon and rounded pommel, the makers marking indicates it was produced by National Denki (National Electric) under the supervision of Kokura. The blade has been lightly sharpened as all combat worn examples would have been. The blade retains majority of the factory finish as well. The original leather frog is also still attached. Overall this is a fantastic example of a Japanese combat bayonet set. 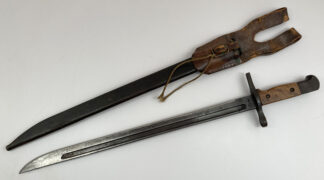