The difference compared to the standard flag of Japan “meatball”  is that this Rising Sun Flag has 16 sun rays protruding from the center circle, exemplifying the name of Japan as “The Land of the Rising Sun.” The Imperial Japanese Army first adopted the Rising Sun Flag in 1870, then the Imperial Japanese Army and the Imperial Japanese Navy both had a version of the flag; the naval version had the center circle off set with the red sun closer to the lanyard side, while this army version was centered. These flags were used until Japan’s surrender in World War II during August 1945. This example produced on a type of lighter cotton material has no major damage and very vibrant color. Both corner stings are attached and the approximate size is 35″ wide by 27″ tall. 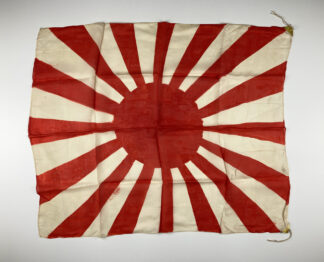