Recently picked up this rare beauty of a helmet from out west. Originally,  this helmet started it’s life as a Heer (Army) M40, later reissued to w/ later period green paint, and reinforced liner, (circa 1943-1945.) This example had a very dark rough texture greenish/black layer  of what looks like field applied camouflage paints, giving it a really great look! Like most helmets towards the end of the war, anything was being used to helmet breakup the easy to see helmet while in a combat zone, this would be the same case with this fantastic piece. The German soldier added a half basket of wire fencing on the shell to help hold foliage or anything else he could use as camouflage. All the split pins are present and undisturbed, the liner has no major damage, and there is the original German soldiers last name written inside, the original late war leather chinstrap is still attached and without any damage. The stamp on the inside rim of “Q66” for the manufacture of  Quist, with the large head shell size of “66.” 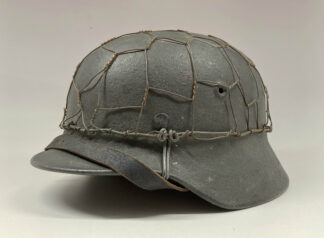