This is a fantastic example of a German WWII Balkan Cross Identification Flag. It is in excellent condition and measures approximately 78″ x 38″ inches. This flag is constructed of cotton with four early brass grommets (one in each corner), these were used to secure the flag to the back of the tank, facing it up towards the sky in order to prevent friendly fire from German aircraft while out in combat operations. This flag is multi-piece construction with a Balkan cross on white background machine stitched onto the red base. No tears or damage and the flag retains very bright vibrant color. These straight-armed crosses were first introduced in 1916-18 and later became the emblem of the Wehrmacht (German Armed Forces) and its branches from 1935 until the end of World War II. Great flag! 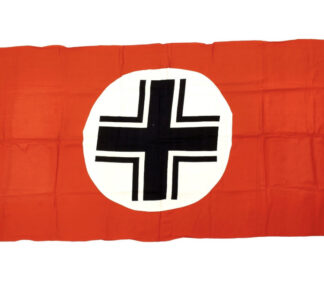