This Legion badge was manufactured in the form of a linden leaf with the Croatian national coat of arms placed in the center. Around the coat of arms is “HRVATSKA LEGIJA” (Croatia Legion) with the date “1941.” The reverse shows a safety style pin attached to the center by a small bronze plate. These badges were made by 2 firms, (BRACA KNAUS-Zagreb) and (Me-Ba Zagreb.) These were only made in aluminum and in this silver color. Veterans of this regiment wore this on the left breast pocket of their German uniform, and even on the sides of their M38 or M43 caps. These are very rare and often do not pop up on the open market. There is no damage or repairs, this piece is textbook in every way. If you are a collector of German volunteer items, or just rarely seen pieces in general, this is a great addition.

note – Former veterans of the Croatian 369th Infantry Regiment who survived the battle of Stalingrad were awarded with the Army Legion Badge for the Eastern Front. The badge shown above was awarded around early February 1943. 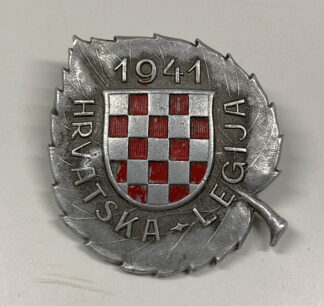