Great example of an early U.S M1 combat helmet. Consisting of a fixed bell shell with the early gloss type dark green paint, and a early Firestone made liner with unpainted A washers. The exterior has an originally attached camouflage netting, this type of net was only seen on the European Theater of Operations, several photographs of Normandy/Battle of The Bulge veterans are seen with this British type of U.S produced net. Overall untouched M1 combat helmets are becoming quite the rarity, this example was pulled locally and has never been in a collection, truly a fantastic piece that is ready for a display case, or to finish off a combat mannequin display! 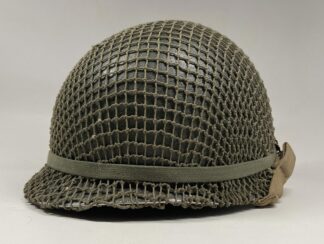