Fantastic example of an early matching numbers bayonet with frog marked S/244G  indicating production by  (Mundlos AG, Magdeburg  in 1935-1936.) The bayonet overall is in an uncleaned state. The blade and scabbard both share the same serial number indicating this set has been together since day one. Much of the original blueing remains.  The leather frog has no damage and shows matching wear to the bayonet. Overall this is an exceptional example of a nice combat used pre war bayonet. 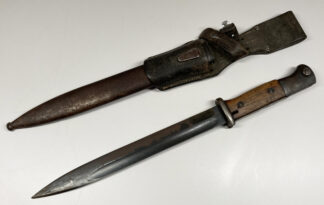