Very hard to find matching set of early field worn pre war pointed shoulder boards, anything Schutzen related is very hard to come by no matter what the condition is.  Each board has an early stitched gothic “S” for Schutzen with the number “1” for Panzer Regiment 1. The stitching color is bright rosa pink waffenfarb, indicating service in a Panzer Division. These early boards show clear signs of once being worn on a uniform, both still have their attachment straps so these could be used again on a coat or fieldblouse. Both boards have no tress or piping, with pointed ends, indicating this is a pre war set to a soldat, (very hard to find!)

When Germany first introduced Motorized Infantry in the 1930s those regiments that were the Infantry component of the Panzer Divisions, prior to being known as Panzer Grenadiers (from 1942), were termed ‘Schützen Regimenter’ (organized into ‘Schützen Brigaden’)  Overall this set is fantastic, with matching wear and clear signs of being field worn. Truly a rare set to find these days! 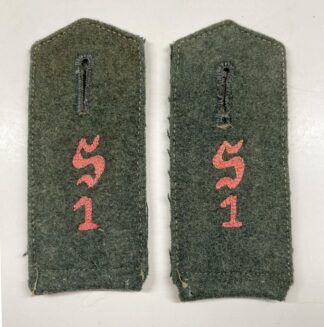