Recently found here in the states of all places, this is absolutely beautiful set of British Victorian era awards with stellar research done by a very good friend of mine. Consisting of the 1895 “Old Head” Queens South Africa Medal with (Relief of Ladysmith & Cape Colony) clasps, and the 1896 India General Service Medal w/ (Tirah 1897-98 & Punjab Frontier 1897-98) clasps. Both are produced in silver and completely uncleansed. The South Africa medal is officially government impressed with (3329 Pte. P. Gallagher, 1st RL. INNIS: FUS:). The India General Service is also marked and heavily worn, this example is regimentally engraved in running script.

After the research was conducted, this came back to Patrick Gallagher serial #3329, Patrick was born in Stranorlar, County Donegal, Ireland. On July 23rd 1880 he would enlist into the British Army at 19 years old and later become a member of The Royal Inniskilling Fusiliers, an Irish line infantry regiment of the British Army. The regiment was formed in 1881 by the amalgamation of the 27th (Inniskilling) Regiment of Foot and the 108th Regiment of Foot. This regiment saw serious combat in South Africa. Attached to the 1st Battalion, Private Gallagher was wounded at the Battle of Colenso December 15th 1899.

Fantastic piece of history with research, the copy of his enlistment file and medal roll information is fantastic! 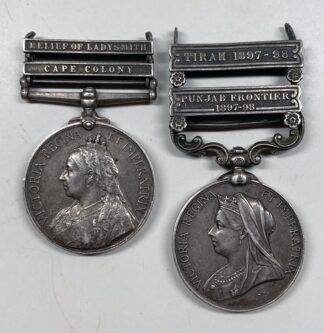