Just an absolutely fantastic group of items purchased from the family In Maryland. SSGT. Peter P. Panagakos was born on October 31st, 1921 in Baltimore, Maryland. On February 16th, 1942 he would enlist in the United States Army, shortly there after he would start his training with the 29th Infantry Division assigned to the 175th Infantry Regiment. The 175th was the 29th Division’s reserve, landing on the still unsecured Omaha Beach on the morning of June 7th, proceeding to its objective to seize the village of Isigny. After D-Day he would be transferred to the 116th Infantry Regiment to help fill the void from so many of their dead and wounded soldiers from the D-Day invasions. He would stay with the 29th until the end of the war, earning a Purple Heart for his wounds received in France, as well as the Bronze Star. 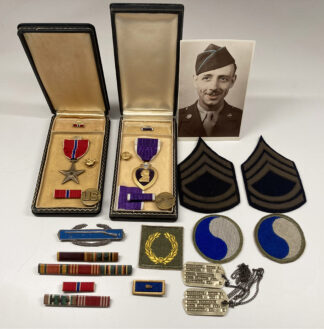