The 13th Waffen Mountain Division of the SS Handschar (1st Croatian) was a mountain infantry division of the Waffen-SS, an armed branch of the German Nazi Party that served alongside but was never formally part of the Wehrmacht during World War II. Made up primarily out of Bosnian Muslims, the Division would issue these red “Fez” caps to enlisted men and Officers. Typically these are unissued examples, this example is field worn, has original sewn insignia on of which is the very sought after TK skull. Overall the red wool has some light wear/mothing to the exterior, but all and all a fantastic example of original field worn Waffen-SS insignia for any collection. 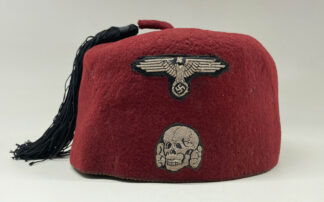